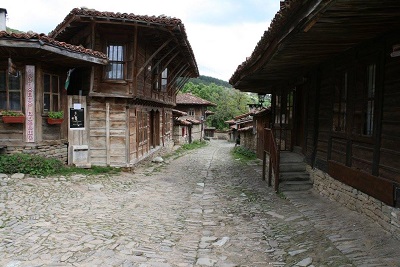 The village of Zheravna resembles a wreath spread over the southern slopes of two small hills in the Eastern Balkan Range. Brooks run softly down its steep lanes. The village houses with their broad eaves peak out behind high stone walls, The majority are well preserved. All are modeled on the"wooden type" house prevalent in the entire region of the Eastern Balkan Range. A characteristic feature is that all Zheravna houses, without exception, face south - with extensive facades in the yard's northern part, far from the street when it passes south of them, and houses turned the otherway, but close to the street if it runs to the north. The older houses are single storeyed and made entirely out of wood. Later houses, with two stories, have their ground floor built of stone. The facades have clearly horizontal lines, emphasized by the forward brought second floor and the strongly jutting out eaves.

They are entirely surrounded by verandahs, leading to the living quarters, with the storerooms and hiding places behind them. Rosettes, star-shaped figures, stylized plant and animal motifs decorate the cupboards, shelves, walls, ceilings and doors. Winding staircases, chapels, colourful rugs and cushions lend a still greater fascination to the Zheravna house. Do not miss seeing the houses of Sava Philaretov (1851), Hadji Draganov (1851), Haltukov(1818), Todor Ikonomov (first half of the 19th century).