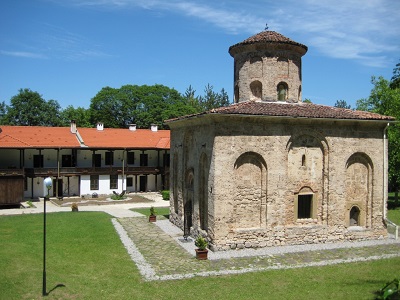 Completely different from both the official Byzantine style and the other official Turnovo School, are the architecture and painting of the Zemen Monastery, founded during the 14th century. It is located above the Strouma River, 76 km south-east of Sofia.

A solid stone building, it was the only one to survive the monastery's ravaging and depopulation after Bulgaria's subjection to Ottoman rule. It was not restored until the 19th century. Such as it remains today, the Zemen church is an absolute exception to the whole of Bulgaria's mediaeval architecture: a cubic building, with three semicylindrical apsides with equal height, reaching up to the roof cornice which unites them in a single group. The roof - a four-wall squashed pyramid with a cupola atop a cylindrical drum, decorated by two rows of blind arches - is unique in the entire Balkan Peninsula.

The facades which are broken up only plastically - by means of blind arches and lacking colour effects - complete the harsh original appearance. A strange blend is achieved with the impact of the inside murals - also harsh, somewhat crude, as if deliberately archaic. With few parallels in contemporary painting, they continued the traditions of the preiconoclastic period in the Eastern Orthodox art. The Zemen master also had a particular weakness for folk-style details which he skillfully depicted. All this makes this monastery a rare monument of original mediaeval folk art, of that marked trend in religious painting which Andrei Grabar called "democratic trend".