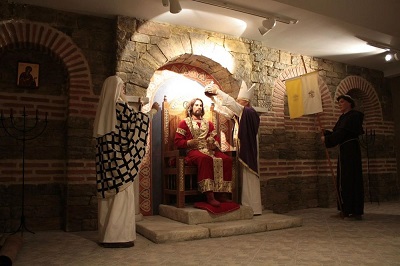 The Old Konak, designed by Kolyo Ficheto in 1872, has seen many key historical events and now houses the Museum of the National Revival and the Constituent Assembly.

The Architectural Reserve of Tsarevets protects the mediaeval fortress walls and gates, including Baldwin Tower, the Palace and the ruins of the Church of the Blessed Saviour as well as the Trapezitsa Elevation, on the opposite bank of the river Yantra, which snakes round all structures in such a manner as to provide a natural defiance. The Trapezitsa Elevation is noted for the many churches and other buildings excavated there.

Another architectural reserve protects the ancient houses to be found in the Varosha and Bazhdarluk districts.

Among other interests in the town are the Ethnographic Museum housed in the Inn of Nikola Hadzhi which was again designed by Kolyo Ficheto and a number of churches including the St. Dimitar, the Forty Holy Martyrs and the St. Constantine and St. Helena.

Noted for its unique monumental stone houses along with churches and drinking fountains, Arbanasi, one of the most picturesque villages in the region can be found approximately 4 km north of Veliko Turnovo. With interiors and upper facades remaining characteristic of revival period architecture, House Museum of particular node include that of Konstantsaliev, the Town History Museum in Hadzhiiliev House and Nikolchokostov's House.