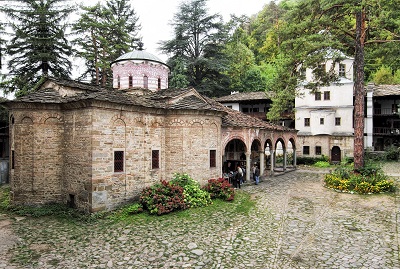 The Troyan Monastery, is known above all for the creative work of Zahari Zograph who painted both the exterior and the interior (a rare practice for the time) of the main church built in 1835, 7 km from the town of Troyan. It is a fine example of the impact of the popular conception of the world and the influence of housing architecture on religious construction.

Here, Zahari Zograph repeated the social and moral "experiments" in religious painting (the compositions Doomsday and the Wheel of Life), left his second self-portrait signed with amazing self confidence in spite of the Ottoman bondage, and painted the figures of Bulgarian and Russian saints. Besides, he painted a completely secular group portrait of the monastic brotherhood in the refectory - something highly unusual for the time. A chronicle dates back the foundation of the monastery in the year 1600; nothing but the throne stone of the church remains from the time.

The Troyan Monastery belongs completely to the Bulgarian National Revival period. Eminent men of letters worked here during the mid-18th century, and a School was also founded. The patriotic mission turned into a tradition. In 1872, Vassil Levski set up here a secret revolutionary committee, which was joined by all the monks headed by the Father Superior Macarius. Four years later, the monastery became a citadel of the 1876 April Uprising.

Fortunately, mast of the great works of old and National Revival art have survived. The iconostasis of the main church made in 1839 is a masterpiece of woodcarving. Amazing in its originality, is the much earlier (1794) carving of the holy altar gates in the St. Nikola Chapel. The icons introduce us once again to the best known National Revival artists: the Samoltovians Dimiter Zograph and Nikola Obrazopissov. Tryavna's Simeon Tsonyuv, Dossyu Koyuv, Koyu Tsenyuv, Theodossius Koyuv Vitanov. Particularly valuable among the multitude of manuscripts and incunabula are the so-called Troyan Homilies of the 17th century. The monastery's "printery" in which fine graphic works, including many landscapes, were made, was widely known.