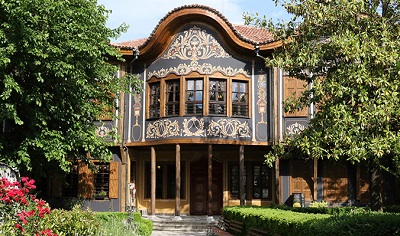 The Museum of National Liberation is now housed in Georggiadi House and includes a descpription of Britain's comppplicity in returning control of Eastern Rumelia, of which Plovdiv was the major city, to Turkey following the April 1876 uprising.

An Ethnographic Museum including representations of the lifestyle of the wealthy of the time is contained within the house of A. Koyumzhioglou, in the countryard of which chamber music is played throughout the summer. A more specific display of local wealth in this period can be seen in the Hindian House.

Many houses contain mini art galleries including Balabanov House, where modern art shows are held and Chomatov House dedicated to the works of Zlatyu Boyadzhiev. The House of Lamartin contains a small museum while behind Nedkovitch House there are some craft workshop.

Other museums and galleries in the city include The City Art Gallery, which also has branches in the old town, a Museum of Icons, mainly church works from fifteenth and sixteenth centuries and a Gallery of Mexican Art which includes Bulgarian work among its contemporary exhibition. There is also Natural History Museum.

As might been expected, Archaeological Museum documents a variety of finds from the local area and surrounding regions. The ancient ruined Nebet Tepe Citadel, with its escape tunnel to the river, is of particular value archaeologically. Other noteable features are the Hisar Kapiya, or fortress gate, remains of a Roman Forum near the central square and much of a Roman Stadium. Classical plays are still performed, however, in the Roman Theatre that does remain from the second century stronghold.