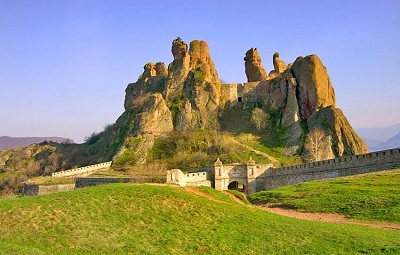 The Trigrad gorge is one of the most impressive places in the West Rhodope Mountain. It is reached from the town of Devin - the village of Teshel. The path is dug out the left bank in the rocks and passes through 80-m tunnel. Here you can see the outlines of the 500-meters gorge with high, above 300 m sheer cliffs. Undergrown spreading pines rise in the holes and cracks of the rocks.

The Rocky Rhodopean Bridges are located~at a height of 1450 m in the West Rhodope Mountains, alongside the eastern slope of the Chernatitsa hill, near the villages of Zabardo and Orehovo. The splendour of the rock phenomena, old-aged coniferous trees and soft outlines of the landscape makes the Rocky Bridges one of the most beautiful spots in the Rhodope Mountains. The biggest and most beautiful is the Upper Bridge, 96m long, 70m high and 35m wide with huge opening.

Pobitite_kamani Columns of destroyed pagan temple, ruins of ancient city or Petrified Forest? That is the question asked by anyone, who passes through the little sandy desert, dotted with sporadically scattered stone colonnade, located 18 km to the West of Varna. These are the famous Pobiti Kamani.

The pyramids of Melnik are rocky formations (earth pyramids) in the south-westen peripheral slopes of the Pirin mountain. They are located in the surroundings of the town of Melnik. These magnificent natural sculptures are outlined in various forms and shapes, looking like haystacks, Egyptian pyramids, Gothic temples, minarets, ancient towers and loop-holes, giant obelisks, rising jumpers with incredible resemblance to colossal stone mushrooms.

The gorge of the Iskara River is located between the town of Novi Iskur and the village of Chomakovtsi, Pleven. Like a giant split in the Stara Planina it is spread out 156 kilome ters away. Nature created marvelous formations of earth and stone, lights and shadows. A number of meanders, sheer cliffs, weird slopes and riverside valleys are scattered from Novi Iskur up to Luti Brod.

The rocks are situated in the western part of the Fore Balkan, near the town of Belogradchik. The region of the rocks is 30 km long and 3 km wide. The rocks have fantastic outlines - a sea of frozen castles, fortresses, people, birds and animals, racing chariots and scattered skyscrapers rising at a height of 200 m.