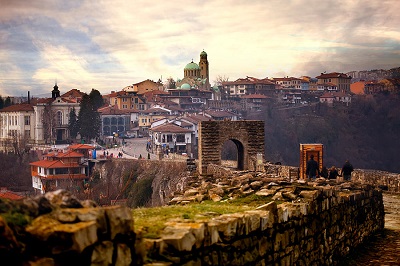 This is the Slavic name the Proto-Bulgarians gave to the first capital of their new state. 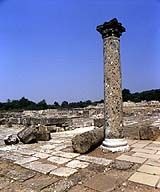 Reviving the traditions of their predecessors they erected a monumental and austere looking city.

Remains of the most impressive buildings have survived until the present: the Large Basilica, the palaces and Throne Room from the second half of the 9-th century.

Built over nearly three decades by Tsar Simeon, the second Bulgarian capital was designed to correspond to the prosperity and upsurge of the Bulgarian state, the conversion to Christianity, the creation of the Slav script and culture. 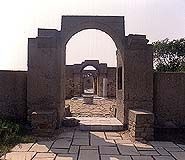 As in Pliska, two fortress walls surrounded the city here too.

With its splendour and ornate decorations the inner city, housing the palace complex and the famous Golden Church, demonstrated the power and confidence of the Bulgarian rulers.

The nearby PATLEINA MONASTERY, part of the Veliki Preslav National Archaeological Reserve, was a center of writers of the famous Preslav school of literature and the place where the unique painted 'Preslav ceramics' were crafted. 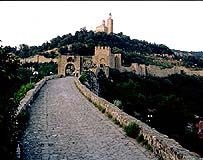 If you should happen to visit this unusual city whose stone houses seem perched one above the other on the steep bank of the Yatra river, you will first be taken to see Tsarevets - the place of the patriarchal church and royal palaces, the hill where Baudouin's Tower still rises, linked with the legend of the Latin Emperor Baudouin of Flanders who was captured by Tsar Kaloyan.

Then you will be shown another hill Trapezitsa - where the foundations of 17 mediaeval churches were discovered.

You will marvel and enthuse over the Bulgarian National Revival period architectural ensembles on Gurko Street, the old Nikoli Inn and the St. St. Constantine and Helena Church.

The original SAMOVODENE MARKET has been brought , back to life and, as in olden times, skillful craftsmen fashion and sell exquisite objects in the small restored workshops.

At night, proud Tsarevets lends the natural decor to a fantastic SOUND AND LIGHT spectacle.