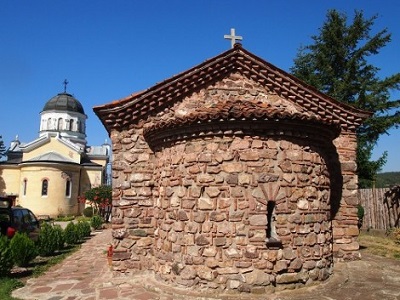 It was founded during the 14th century, again probably due to Tzar Ivan Alexander, when 14 monasteries known as the "Sofia Mount Athos", were erected around Sofia. Destroyed in 1332, it was among the first monasteries to be restored later - in 1493 the buildings were restored, and St. George's Church erected, the sole survivor today.

On the outside, the church is small and insignificant, like all the "semi-legal" buildings of those dark times. As a compensation, the murals (partially preserved today) turned the interior into a glittering gallery. The spirit is here alive of the aristocratic Turnovo School. The colouring is respectfully solemn, the drawing elegant, to the point of exquisiteness, the figures are lofty and exalted.

The artists of the Kremikovtsi Church were no blind imitators of traditional methods. In the overall composition of the murals, they introduced a new element which renewed the art of the time, and became traditional. This is the richly ornamented frieze of the waist-length figures of saints and martyrs, introduced for the first time, which separated the "classic upright saints" from subject scenes diversifying and enriching the general picture.

Kremikovtsi Monastery also contains some valuable examples of calligraphic art which was particularly perfected here during the 15th century, when the Sofia School of Literature was created and developed at Dragalevtsi, Kremikovtsi, Kokalyane, German and other monasteries. The so-called Kremikovtsi Gospel is an example of it.