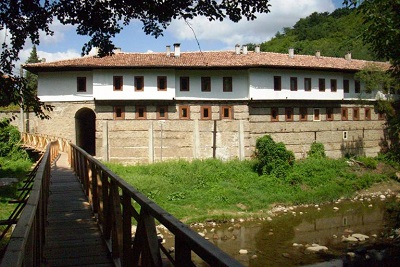 The Kilifarevo Monastery has gone down in the annals of Bulgarian history as the "Second University of Mediaeval Bulgaria", following that of Clement of Ochrid's large School in Ochrid. It was founded between 1348 and 1350 upon the order of Tzar Ivan Alexander, 12 km south of Turnovo, for the purpose of providing shelter for the Hesychast and hermit Theodossius of Turnovo, a man of letters and an enlightener roaming the Bulgarian lands at the time. The monastery soon gathered writers, philologists, translators and calligraphers alongside with clergymen who spread Hesychasm, theologians and philosophers. Liturgical books and Byzantine chronicles were translated, volumes were compiled of the lives of Bulgarian, Serbian and Greek saints, and sermons were written against the different and numerous heresies.

The most remarkable work of art here is again in the chapel: the old carved iconostasis, probably the work of Tryavna masters, fashioned with great imagination, seen above all in the figures of mythical monsters and beasts, with great sculptural talent, manifesting at the same time a perfect measure for decorativeness.

Kilifarevo Monastery repeatedly restored and reconstructed, has a complete, harmonious appearance, blending with the enviroment, which ranks it among the finest architectural ensembles of the Bulgarian National Revival period.