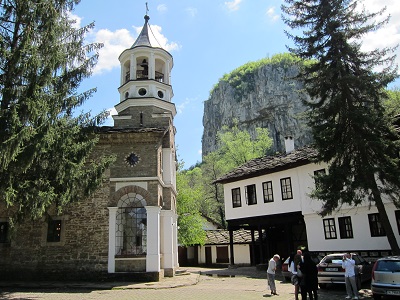 In existence as early as in the Second Bulgarian Kingdom, it was subsequently destroyed and re-built on two occasions. It was restored in its present location - in the Dryanovo River gorge, 4 km away from the town of Dryanovo - in 1845. During the 1876 April Uprising an armed detachment of 200 men who, pursued by the enemy, found shelter behind the walls of Dryanovo Monastery. Throughout nine days, they engaged in fierce battle before being crushed: the insurgents and monks were killed, the monastery burned to the ground. Relics of the April epopee are preserved in the monastery museum today, along with some valuable icons.