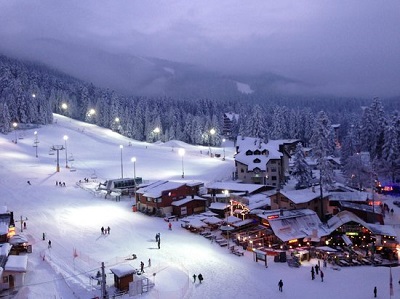 Situated at 1300 m above sea level on the northern flank of Rila Mountain, in the very foot of Musala peak, Borovets is the largest Bulgarian mountain resort. It was established at the end of the 19th century as a hunting place for the Bulgarian tzars. Gradually Borovets developed into a modern ski resort with an excellent network of ski runs and lifts, providing high class and luxury hotels, haute-cuisine restaurants and varied leisure-time entertainment opportunities. Borovets is among the most popular winter destinations in Bulgaria as it provides excellent opportunities for the whole range of winter sports - from the Alpine sports to cross-country skiing, ski-jumps and biathlon. The resort has twice hosted World Cup Alpine skiing rounds, and its biathlon track is one of the best in the world.

The slopes of Borovets have a permanent snow cover, more than a meter and a half thick, from November to May. The air in Borovets is crystal-clear and totally free of any pollutants. The average temperature during January, which is the coldest month, is minus 4.6°C.

Extensive skiing for everyone

The 24 ski runs with a total length of 58 km are of various difficulty and thus are suitable for all, be they beginners (3 tracks), intermediate (3 tracks), advanced (10 tracks) or expert skiers (5 tracks). The slopes and runs are maintained in perfect condition and are designated with international markings and multilingual signs. A snow machine is also available.

The Borovets Ski School has been known as one of the best in Bulgaria. It has more than 200 ski instructors fluent in different languages, many of whom are former professional skiers. The training is divided in 5 stages, from A to E, according to the level of difficulty. The lessons may be group or individual and all “course graduates” receive skiing-certificates on a special club dinner.

Ski/snowboard with the best equipment

Borovets has ski and snowboard rental services, situated next to the lift stations around the runs. They offer 7000 sets of skiing equipment from world famous companies, as well as toboggans, sledges, etc. In addition, skiers/snowboarders can leave their own equipment for safekeeping there.

There are Ski and snowboard Package offers, tailored to your needs in order to save you money and time. They cover skiing or snowboarding classes, unlimited lift usage, ski/snowboard and boot hire or storage of own equipment.

The Ski patrol provides a 24-hours emergency service. The patrol is organized in four teams, which are fully equipped with all the necessary equipment including a helicopter. The base of the Ski patrol is at the first station of the cable lift.