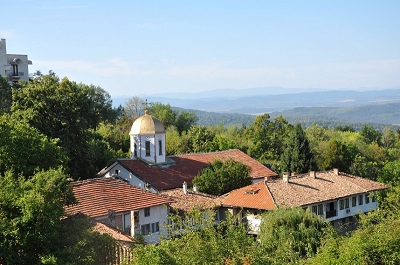 There are two monasteries in the village of Arbanassi, 3 km from Veliko Turnovo - St.Nikola and Holy Virgin.

Between the 16th century and its tragic devastation two centuries later the village - one of the wealthiest in preliberation Bulgaria, boasted a rich and unusual house architecture, the work of skilled masters from different parts of the country.

St. Nikola Monastery was part of the widespread religious construction under the Assen dynasty, the founders of the Second Bulgarian State. Its artistic and historical value lies above all in the surviving murals in the St. Elija Chapel, probably dating from 1716: a monumental figure of Christ the Great Archangel, 12 scenes from the Holy Akathistos, and 6 scenes from the life of Christ. The effective colouring and rich palette, the confidence in the portrayal of the human figures, the unusually varied architectural decoration reveal the hand of a master from a superior and more erudite school. The filigree wooden iconostasis in the chapel, with its delicate and exquisite decorations, is valuable treasure.

Though situated in the same village, the Holy Virgin Monastery suffered a different, though no less tragic fate. It is not known how it survived the attacks in 1393. What has remained of them warrants the assumption that they, too were painted by travelling artists - highly paid at the time, but quite affordable by the wealthy inhabitants of the village of Arbanassi. At the Holy Virgin Monastery too, the Tryavna School has left valuable icons behind.